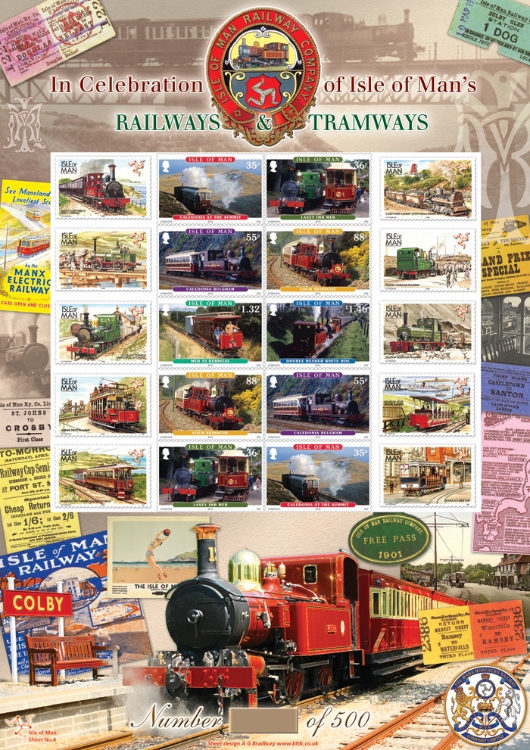 This stamp sheet not only features ten of the new Isle of Man railway and tramway stamps issued on 24th June 2010 (all six designs), but also designs from ten of the previous issues featuring trains - the first time they have been represented in this format.  This sheet is sure to be a collectors' item for both Isle of Man and Railway enthusiasts - and limited to only 500 sheets.

When nationalised in 1978 it fell under the banner of "Isle of Man Railways" along with the Manx Electric Railway. Certain items of stock were changed to read "Isle of Man Passenger Transport" in the mid 1980s, but this was reverted to "Isle of Man Railways" again in the 1990s. A change in management style in 1999 ensued, and the islands trains, trams and buses were presented under the banner title of "Isle of Man Transport". The electric railway was greater affected by this change, with a series of non-historical and somewhat overly-modern liveries etc., but in 2007 this was changed and the railway is marketed once more as the "Isle of Man Steam Railway" although in keeping with the historical aspect, the coaches and locomotives carry original names and transfers.

The banner heading of all the island's government-owned railways was once again changed in 2009 and they are now collectively known as "Isle Of Man Heritage Railways".

This wonderful stamp sheet features images from most if not all of the above periods in its history.